A downloadable Visual Novel Game for Windows and macOS

One to Three: Sovereignty is a short fantasy, mystery, otome/dating sim visual novel about magic mirrors, parallel worlds,  curses, and choosing a successor for a crumbling  monarchy. With a focus on world-building lore and parallel perspectives, the player is placed in the role of an unlikely investigator trying to help differentiate between three identical princes and finding the 'real' heir to the throne of Escyil. You choose whether politics, truth, or passion guide your investigation and who takes the throne, and your heart, in the end.

The full game will be released sometime in 2021. The best way to support the game is to share the demo. Follow this page or my twitter (@cmmendio) for updates on development progress.

Rieve spends most of her days alone in the wizard, Oculum’s, ice castle. She was accidently cursed as a child, so her internal organs melt if her body temperature rises too high. Oculum created the castle for her to live comfortably, but her curse still prevents her from living a normal life. She has long since lost contact with family and friends, only seeing Oculum and her childhood friend, Carein, on occasion. She fills her days with housekeeping, cooking, and cleaning for Oculum, and of course, reading books in his study dreaming of a different life.

One day she stumbles upon a magic mirror sent to Oculum for study, and after touching it, she is transported far from home. Or is it? The three identical men tell her she’s only a few miles from home in the capital’s keep. But they also each claim to be the crown prince? Rieve doesn’t know how or if any of them are telling the truth, but she can’t turn her back on this taste of adventure when one of the Princes asks her to help them. Can Rieve figure out which one of the Princes belongs to the world she’s stumbled into? Or which one should? Will this experience change Rieve’s life forever or help her embrace the magical life she’s already had?

a curious, hard-working girl with a history of getting involved with problems she shouldn’t. She’s sheltered and lonely and hides her problems from everyone around her, but that doesn’t mean she doesn’t mind talking to others.  In fact, she prefers to be in charge to keep people's attention off of her. She's responsible, hardworking, and by circumstances, domestic. She’s never even met royalty let alone had a country's future in her hands, but she enjoys the Princes' company, perhaps one more than the others.

Crown prince of Escyil, only child, known to be reclusive and hard-working

LEI (Yellow)- confident and conversational, but doesn’t like people and keeps to himself. He is thoughtful and religious, knowledgeable on his father’s family and religion, openly shows his emotions

SOL (Red)- serious and passionate, his radical views and aggressive personality alienates him from others. He dreams of dismantling the monarchy, and is knowledgeable on history and politics. He stands up for himself and others but is honest rather than kind.

ASOLE (Green)- nervous and shy, he is scared of other’s expectations and opinions so stays away from most people. He is intelligent but has low self-esteem. He is knowledgeable on law and mother’s family. He responds well to positive reinforcement and patience.

Version 1-The wizard who saved Rieve’s life and gave her a home . His first love is academics. His second is forgetting everything else. Luckily, he has Rieve and Carein, his apprentice, to keep him grounded. His is compassionate, despite occasionally being preoccupied, and tries to help others whenever he can.

Version 2-The new royal Wizard, Asolei’s new tutor, who get wrapped up in the royal drama when he gets too close to one magic mirror. Obviously, he prefers books to people.  He is serious about his duties and responsibilities as a mage and sometimes forgets to take care of himself. Doesn’t seem to be close to others or know how to handle people.

The guard put in charge of the 3 Princes, loyal and hardworking. He puts most of his effort into his job to provide for his family, despite others putting him down. He is shaken by the multiple princes appearance, but takes his role seriously. He is easily influenced by others' opinions and actions.

Rieve’s childhood friend, who was the one who accidentally cursed her in a childhood fistfight . Spends most of her time with her mentor, Oculum, and/or Rieve because most people, including her family, are scared of her magic. She was angry and violent as a child and has grown up regretting who she used to be. While she still struggles to control her emotions, she channels them in a more positive way, focusing on studying her magic and helping others.

Uhm, is it still in development or dropped?

Hello! I had to put this project on the back burner for a while, but I still plan to finish it. So a little bit in between? Thanks for you interest!

Is this game still in development?

I am still working on it, but I had to put in on the back burner for a while. Thanks for you interest!

Thank you for the response! I've added this to my library. Good luck with development! You have my support.

Reply
I pegged Satan1 year ago

Can't wait to buy it, if it's still in progress! c:

Is this game still in progress ?

Yes, it is! It has taken a little longer than I planned, but I do have a complete game now, just waiting on editors and then play testing at this point. Thanks for you interest! It should definitely be out sometime this year.

OMG I am so happy to hear this! Thank you for the heads up, looking forward for the full game!

I loved the story and I really can't wait for more! I love reading the books and  having to use that in the interrogations to figure out who is who. I really liked all of the characters that were introduced and seeing the differences between the princes and the two Oculums'.

The demo was fantastic!

Loved the amount of lore that reading the books provided and having to use what you learned in the for the interrogation, in conjunction with keeping aware of time was really great. Really good puzzle design!

I've featured this on my showcase on my own itch page since I enjoyed it. If you'd rather I didn't have it here, just let me know. :)

It's a great story for those who like to solve mysteries.  Personally, I find it difficult to find a story that would puzzle me. And every time I have a chance to use my brain I absolutely adore it. Thank you for giving me this sweet experience. Cannot wait for the full release. Good luck!

This is great! I'm really curious how the story will pan out and what repercussions there will be for my choices. I like all the personalities involved and the princes design especially. I also really relate to Rieve's limitations! Can't wait to see where this goes :) 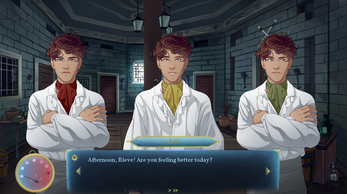 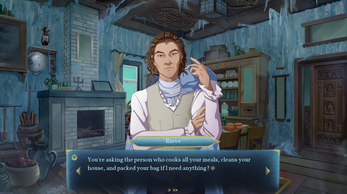 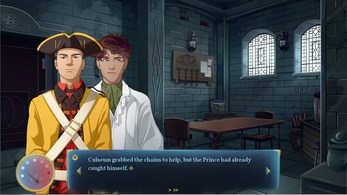